Sage first became involved with UN Youth as a delegate in 2014 when she attended her local Evatt competition.

She then attended as many events as she could in the coming years including getting to attend the 2015 National Conference in Hobart. Sage began volunteering in 2017 after graduation and held the role of Youth Rep Liaison Officer. Since then she has facilitated at nearly every local event and two national events.

She has also held the roles of event convenor, Welfare Supervisor, Director of Operations, and now President of the NT division. As President, Sage works on promoting a positive culture among volunteers and improving on important financial, administrative, and communicative processes within the executive.

Sage is passionate about empowering young people to engage with the issues they care about, which is what UN Youth did for her as a delegate, and what she hopes UN Youth NT continues to do for delegates to come. When she is not volunteering for UN Youth, Sage has a full-time job in retail and is also studying for a Bachelor of Psychological Science online through Deakin University.

Sage Hates:  Waking up early, running out of milk, and people who chew loudly 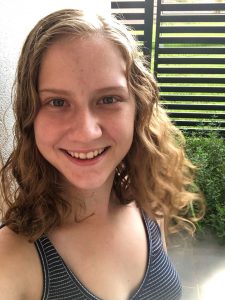