In July, delegates from across Australia, the United States and the Asia-Pacific region gathered in Canberra for the 53rd annual United Nations Youth Australia National Conference. The weeklong event called on delegates to realise their potential as change-makers through a series of workshops, debates and speaker sessions.

Throughout the week, delegates harnessed their diplomacy skills to tackle issues of both national and global importance. The conference focused on the theme “Forces of Change” which challenged delegates to analyse the role and effectiveness of different levels of advocacy, particularly grass-root social movements. Within this theme, delegates analysed their role and power as young people within the democratic process, and the different pathways by which social change can be achieved.

After a long trek, particularly for our international delegates from New York, Singapore and Japan, delegates settled into the accommodation at Bush Capital Lodge and already the weeklong marathon of socializing had begun! In the afternoon, delegates scrambled around the parliamentary triangle in a race to win the scavenger hunt; a coveted pin in any delegation’s hoodie.

On the Monday, delegates assembled at the Australian National University for the highly anticipated opening of the Conference. The National Children’s Commissioner, Megan Mitchell, warmly welcomed the delegates and facilitators, setting the stellar benchmark of speakers and discussion for the week ahead.

Throughout the week, delegates had many opportunities to engage with public figures that are currently driving social change across national and international platforms. Speakers throughout the week included Ivan Hinton, Deputy National Director for Australian Marriage Equality, Jenna Price the founder of Destroy the Joint, and CEO of White Ribbon Australia Libby Davies. Other notable guests at the conference included ABC journalist Virginia Haussegger, political editor for the Australian Financial Review Laura Tingle, ex-chief of the Defence Force Chris Barrie and local slam poet Omar Musa. Along with many others, these guests provided delegates with an insight into the skills and strategy they need to influence public policy and create change in their local community. 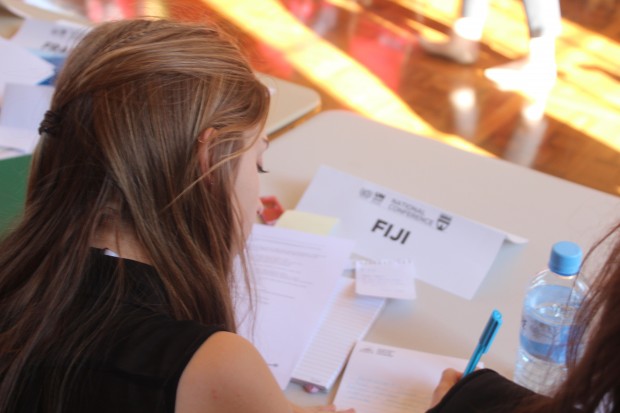 On the Wednesday, Model United Nations (MUN) debates took place at iconic Australian institutions across Canberra, providing delegates with a unique opportunity to step into the shoes of decision-makers and navigate the unpredictable waters of international diplomacy. Delegates were thrilled to debate in prestigious venues such as the High Court of Australia, the National Library and the chambers of the Senate and House of Representatives at the Museum of Australian Democracy at Old Parliament House.

Following the final General Assembly debate in Albert Hall on the Friday, delegates assembled at New Parliament House for the official close of a momentous week. Over the week, the delegates collectively voiced their concerns on pressing global issues by writing a series of recommendations. These concerns and solutions were presented to the federal member for Canberra, Gai Brodtmann, and the ACT opposition Minister for Youth, Andrew Wall. In this document, delegates proposed constructive solutions to social and human rights issues, including refugees and asylum seekers, peace and security, racial discrimination and the environment. The Youth Declaration provided a fitting conclusion to the weeklong discussion on the ways in which young citizens can drive policy change in their own communities.

Delegates and facilitators would like to thank Chief Convener Sophie Corea and her Organising Committee for the incredible experience that was National Conference this year. If you’re in years 7 – 12 keep your eyes out for upcoming UN Youth events, and watch this space for information on National Conference 2015 in Hobart.