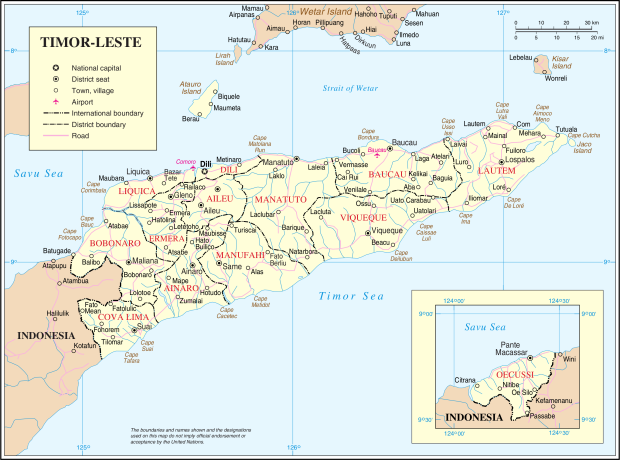 The itinerary for Pacific Project 2014 by Alexandra Fuller

After completing orientation activities in Darwin, delegates have flown to Dili, the nation’s capital city in the north of the country.

Staying here for one night, we will be given a tour of some of the capital’s historic sites, including a moving visit to the Santa Cruz cemetery, the site of the massacre of over 250 Timorese involved in a peaceful memorial procession in November 1991 by Indonesian soldiers. Students will then have the opportunity to visit the Head Office of the Alola Foundation, a non-governmental organisation founded by former First Lady of Timor Leste, Kirsty Sword Gusmão to support the women and children of the nation.

Travelling south west from Dili, delegates will arrive in Maliana, where five days will be spent volunteering at Encouragement House. Encouragement House is a project of the Australian Encouragement Foundation and provides educational support and boarding facilities for children from seven rural villages, allowing them to attend school in Maliana, the capital of the Bobonaro district. Here, students will become part of the community through assisting with meal preparation, gardening, educational programs and building projects, as well as tutoring English through song and games. We will also be given lessons in the local language of Tetum and in Timorese history. During this time, we will also visit the Community University and local markets and work in the rice fields that support a large proportion of Maliana’s people economically. Our last morning in Maliana will include attendance at a local church service. Portuguese influence in Timor has resulted in the dominance of the Catholic faith.

The second phase of the program aims to provide insight as to what life would be like for an aid worker travelling within a developing nation. We will have the chance to explore the township of Same (south of Dili) before travelling east into the Viqueque region. Here, we have the privilege of staying with Catholic nuns at a local orphanage whilst exploring the rich natural beauty and history of the region. Viqueque is considered to be one of the nation’s greatest resistance strongholds during both Portuguese and Indonesian occupation. During our time in Viqueque, delegates will visit partner schools of Destination Dreaming as well as many community development projects within the district.

Leaving Viqueque, students will travel north to Bacau: Timor’s second largest city. We will be able to meet students gaining an education accredited through the Australian Catholic University at a local teacher-training centre, before spending the night at the Canossian Centre for disadvantaged girls from across the country. We will be fortunate enough to participate in a cultural evening hosted by the local girls residing at the centre. Returning to Dili, delegates will visit the Australian Embassy, where it is hoped the Australian Ambassador will be available for a meeting to discuss their role in Timor Leste. We will also visit local entrepreneurs and some of Dili’s most beautiful features, including the Statue of Christ. Following a program debrief, students will return to Australia, enriched by experiences of Timor Leste.

Sign up to start getting involved in Australia‘s largest youth education organisation.

, you are all signed up!

Over the coming months you will hear from us with opportunities to get involved. In the meantime, show us some Facebook love and bring a few friends on board too.